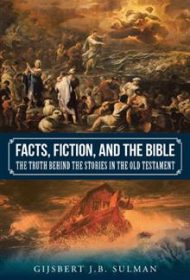 Clocking in at over 600 pages, Facts, Fiction, and the Bible is a prodigious work. In covering the entire Old Testament, author Gijsbert J.B. Sulman looks to examine Scripture critically and, as the title suggests, separate fact from fiction, investigating what parts of the Bible are history and what parts are literary constructs.

Sulman spends considerable time examining topics such as the Genesis and Exodus stories and the schism of Israel that led to establishment of the Northern and Southern Kingdoms. His procedure is simple: Relate to readers the biblical events and then explore the historical context for each. For instance, what many casual Bible readers believe is a singular Creation story is really three different stories constructed during different periods of Jewish history. Over time, the stories merged into a portrait of beliefs, not intended as history, the author contends, but as a metaphoric way of understanding the world.

From the parallels between King Solomon and Egypt’s Amenhotep III to the influence of Zoroastrianism and Persian culture on Judaism’s belief in monotheism, Sulman skillfully unpacks the cultural influences that may have sculpted Judaism. Ultimately, he aims to provide a mature understanding of Scripture for believers and to demonstrate to fundamentalists that the Bible is more complex and derivative of other cultures than they might believe.

Sulman’s book is well written, using plain language to convey complex ideas and convoluted timelines. Occasionally, dropped words, odd use of commas or repetitious language (e.g. using the word “bad” five times in eight lines of text) mar the narrative. Most striking is that after hundreds of pages, there’s no concluding chapter or epilogue bringing all the author’s ideas together, leaving an incomplete feeling.

While the historical detail might overwhelm casual readers, and mainstream scholars might object to his inclusion of research from such controversial authors as Graham Hancock and Tudor Parfitt, those interested in comparative religion and the cultural formation of Judaism will find much to debate here.