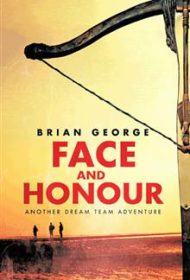 The protagonists are a trio of friends/colleagues/lovers—one man, two women—who share a close, highly sexual relationship that’s frequently detailed. Due to their co-owned foreign import business, the trio travels extensively, initially journeying to Bangkok in order to set up a love match between two lonely friends. Once accomplished, they hop from Thailand to multiple places in West Africa, encountering situations that appear to need their help. Even though they’re business people rather than crime fighters, they inexplicitly possess talents in such disciplines as martial arts, spiritual healing, MacGyver-like expertise, etc.

Rather than resolving a central conflict, the story is a wandering, hedonistic travelogue with a dizzying tone that careens between sexual romp to genital mutilations by Third World zealots. The book’s title refers to an extremist Islam ideology that men have every right to abuse women who dare question their authority; if a patriarch appears unable to exercise control, he then loses “face” and can’t uphold his “honour.”

While the author has a knack for description (clothing, food, locales), too much irrelevant detail overpowers the story. For example, in the middle of a horrific kidnapping, our hero stops for multiple meals and drinks, all described in minutiae.

Necessary information and backstories are also awkwardly handled. The protagonists’ business enterprise isn’t explained until halfway through the book, a major character’s backstory isn’t introduced until the last third, and multiple references to an earlier “scam” are never explained. Additionally, all of the Muslim men in the story are extremists cast as vicious evildoers, which lends an unbalanced feel to the narrative.

Other than the first few pages of vague, run-on sentences, the author is skilled in his execution of clear, grammatically fluid prose. But given the issues cited above, a revision is necessary before his story will hold wide appeal for action-adventure readers.