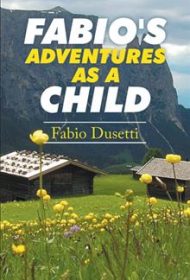 Fabio Dusetti was forced to grow up fast in the post World War II years in Italy. In this observant memoir, he details his work as a farm laborer, which began at the tender age of seven, and ends when he’s 14.

Dusetti’s father drank to excess and his mother took lovers, some of whom were abusive to her children. One day when he was seven, his mother took him to a farm some distance from their home where he was shown various tasks — and given a bed and drawer to store his clothes. “I was feeling a bit strange. I didn’t know what was happening. Me with this strange person and why was she showing me the stables?”

His mother left, and suddenly Dusetti found himself working on the farm, herding horses and cattle and missing so much school that catching up became a distant dream. The author often notes that although he was able to learn math, reading proved extremely difficult. As he got older, Dusetti moved from job to job, making occasional visits home.

The author’s prose sometimes has the ring of English penned by a non-native speaker (“This breakfast was adorable for me”), but Dusetti writes vividly about the alpine villages where he worked, skillfully describing farming practices or his surroundings, such as the jerry-rigged light switches in his family home. While he experienced a hard life as a youth, he expresses palpable joy about simple things, such as a good meal, small kindness, or the beauty of the mountainside.

The story has an unfortunate repetitive feel, as the author often writes about being hired for a job and then being denied or never receiving his pay. Such situations are unfair, but it becomes frustrating to read about them repeatedly.

That said, Fabio’s Adventures remains an engaging tale of life in post-war Italy. Those interested in the time period or region, as seen through a child’s perspective, should enjoy this book.