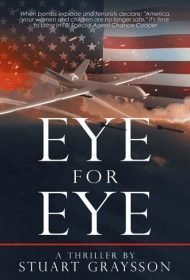 With Eye for Eye, retired government employee and terrorism researcher Stuart Graysson crafts a gripping procedural about a squad of dangerous FBI operators assigned to track down terror cells inside the U.S.

Chance Cooper is an FBI Special Agent still traumatized from seeing his partner, Jessica DePaul, killed recently. When improvised explosive devices start blowing up grocery stores in the American heartland, Chance is tasked with taking down the terrorists. On the surface, he’s a fairly standard white hat, but his partner’s loss has turned him into a dangerous coiled spring.

The bad guys include a bomb maker, several terrorists, a Yemeni bioterrorism expert who launches a botulism attack on Central California, and a retired Egyptian professor preaching tolerance while secretly directing violence. They’re all operating independently without realizing they’re being manipulated by a single organization called “The Group.” Led by René Bossard, the dangerous organization has been launched by European financiers, business leaders and politicians. Bossard’s plan is to fuel the rise of radical Muslims in the Middle East, destabilize the West, and profit from the economic fallout.

In a strategy that recalls Tom Clancy’s Rainbow Six, Cooper forms a strike team nicknamed “The Misfits.” It features his second-in-command, Hank “Big Mac” McIntire; a former Hostage Rescue Team operator; a “Q”-esque digital bloodhound; a psychologist, an Iranian computer expert; and a predictive behavioral analyst—all weirdly charming in their own ways.

Graysson’s portrayal of the terrorists is mildly xenophobic, but to his credit, every character has a backstory and rational motivation. He also employs the best tactics for thriller writing: showing the action, not lingering too long on narrative explication, and balancing the big picture plot with the individual characters aiming down the barrel of a deadly weapon. Graysson’s research fuels the book’s authenticity, integrating modern technology like drones and satellites.

The first of a four-book arc, this propulsive thriller is as good as anything written by the likes of Clancy, Brad Thor or Daniel Silva.