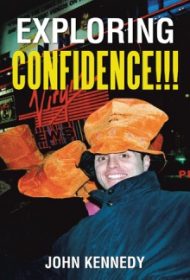 Exploring Confidence!!! is one man’s story of dealing with epilepsy and other neurological issues, as well as his many other experiences, told in his own words.

Author John Kennedy—without explanation he’s called Lee throughout the memoir— was born in 1971 in Birmingham, England. From childhood, he was plagued by seizures and other neurological disorders that confounded doctors. It wasn’t until 2001 that a four-hour surgery gave him a modicum of relief. To his credit, Kennedy has made a life for himself, working, traveling the world, marrying and becoming a father. He’s also an avid English football (soccer) fan.

His book touches on a variety of seemingly random topics, such as medical tests like EKGs (“There are so many forms of tests along with surgery”); a trip to see the World Cup (“Well we went out to Italy in the middle of 1990 and watched some massive games”); and another trip, this time to America (“I started my visit, [sic] by staying with my friends Jenni and Dave in Gaithersburg of Maryland”).

While Kennedy’s health issues are compelling, the lack of thematic coherence is jarring, as are writing problems that often make it difficult to understand what the author is trying to say, perhaps because of his illness. Kennedy’s text often repeats itself, sometimes a couple of sentences, sometimes long passages. Time and place are distorted. Some sentences are incomplete or incorrectly punctuated; some are just puzzling (“Now this well certainly somewhere if not many seems of interest for anybody to go along and visit excitedly are the places with areas like Central Park in Manhattan of New York of that personally myself have visited reaching there on many occasions…”)

The result is a narrative with many challenges to comprehension. Kennedy is to be admired for his desire to tell his story. Perhaps with the help of an editor, he could make the book more readable.