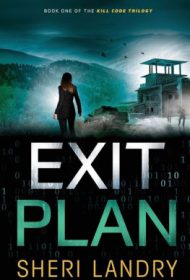 Prize-winning blogger Sheri Landry goes to some extremely dark places in her novel Exit Plan, the first in a series that combines a thriller with sexual elements reminiscent of E.L. James’ Fifty Shades series.

The story opens a decade ago as special ops agent Jack Waters, 23, goes undercover at a high school to get close to Maxwell Sparr, the son of drug kingpin Matteo Sparr. Jack also falls in love with his classmate, Jessa. Inevitably, bad things happen, including a car accident that kills Jessa and her family.

In the present day, Jack runs his own security company with his best friend and a cadre of operatives at a secret camp in the Appalachians. Matteo’s son Maxwell has shifted the family business from narcotics to focus on digital espionage, fraud and treason. In pursuit, Jack’s team raids a farmhouse rumored to house Maxwell’s elite hacker, Zane. There, Jack is confronted by Dana, Jessa’s best friend, and, surprise, by the presumably long-dead Jessa, both of whom work for Maxwell under Zane’s supervision and under extreme coercion.

As Jack and Jessa regroup back at his compound, Jack finds Jessa traumatized to the point of losing her memories, not to mention having a shockingly scarred body thanks to her torturous past under Maxwell’s domination.