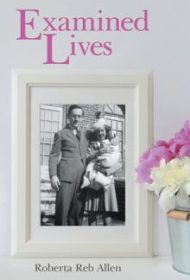 In this memoir, Roberta Reb Allen pieces together the facts of her mother’s life and mental illness.

Allen is the oldest child of Gretchen Richard and Everett Reb, a poorly matched couple who differ in numerous ways. Allen recalls her mother as pleasant and kind, “but not very sophisticated” and her father as “a glad-hander able to get along with almost anyone.” But when the author delves into the family’s extensive collection of letters, diaries, scrapbook and other records, she finds a darker truth.

Her mother’s mental decline seems to begin with an intense dental procedure that leaves her with only six of her original teeth. When she later crashes the family car into a telephone pole, Allen’s father deems it deliberate (although Allen notes that her mother was a poor driver and hadn’t mentioned being suicidal). Gretchen’s confession to her mother that she isn’t sexually satisfied, has masturbated (“self-abuse”), and is chronically worried about her husband’s fidelity, coupled with her so-called “fancies”—letting her son’s hair grow long, burning candles in wine bottles, etc.—leads to a schizophrenia diagnosis and ultimately a lobotomy at age 33. The description of the procedure is chilling, including use of an ice pick device driven by a hammer into the orbital bone. Gretchen’s “drive and sparkle” are forever gone.

Allen’s own mental health is also impacted by her upbringing. After her mother is “adjudged insane,” she describes herself as a “feral child” who later suffered major depression and debilitating irritable bowel syndrome.

This is a candid and thoroughly researched and documented tale. Allen writes without judgement, letting readers get to know the characters. Her mother is wholly sympathetic, a creative spirit who was likely not nearly as mentally unstable as diagnosed. Allen’s father is less likable, but also sympathetic in his uncertainty over how to handle his wife.

Overall, this is a well written and researched story. It should resonate with a wide readership, particularly those touched by mental illness.