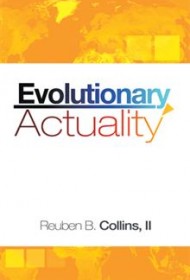 “Evolutionary Actuality” is author Reuben B. Collins’s term for a political theory based on the inevitability of social change. This theory posits that humanity is evolving toward an equity-based society “where the distribution of essential resources is equally shared.” It does not guarantee economic equality but rather what he terms “a presumption of [economic] success” for all.

This book is a product of the bitterly divisive political climate of the Bush and Obama presidencies. Recent phenomena such as the Tea Party and Occupy movements reflect a debate regarding fundamental political principles, and Collins offers a contribution to this discussion. The author holds forth on a variety of economic, political, and social questions with an emphasis on race relations in America.

Collins presents a balanced view. He has researched and credits arguments from every shade of the political spectrum. He looks for solutions to the questions he poses not only in modern, Western models but also in traditional and ancient societies. In an atmosphere of political polarization, the author’s equanimity, sobriety and ideological independence are rare and refreshing.

The book’s flaw is its unclear structure and stilted prose. It meanders from one topic to another without a clear statement of the point the author would like to make within each section. The author’s pseudo-academic diction makes simple arguments or commonplace opinions appear needlessly complex. His epilogue, where he drops the academic conceit and speaks in his authentic voice, is his most effective writing.

This book is the political theory equivalent of folk-art. The latter has a charm of its own but is in a category different from Da Vinci or Picasso. Collins’s homespun philosophy is humane and compassionate, but his theories are unlikely to counter those of Adam Smith, Karl Marx, Ludwig Von Mises, or the other lions of political economy.