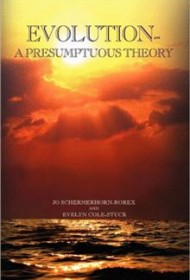 This relatively short book seeks to cast doubt on the theory of evolution. The authors strive to accomplish this by offering 12 terse chapters addressing various aspects of the theory: Darwin, The Fossil Record, Mutations, etc. They end the book with a “Conclusion” in which they assert their belief that life in its most primordial form could not have emerged from inorganic matter and that the “primordial soup” evolutionists often refer to is an impossibility.

While the brevity of the book is refreshing, the narrative, organization, and supporting research leave much to be desired. In the foreword, for example, the authors make the highly questionable claim that their credentials (emergency room nurse and medical transcriber) are “totally immaterial” since “every scientific fact known to mankind is available at the touch of a button” via the Internet. Taken together, their excessive overconfidence and inferior research skills (the book lacks a bibliography and footnotes) make this book unnecessarily difficult.

While the book represents a serious effort by the authors, the result offers no relevant contribution to issues surrounding evolution. In each chapter, the authors offer what appear to be intriguing scientific points, but follow them up with polemic arguments. An example appears on page 42: “Is it believable that a plant, growing in water, could be tossed up on the shore by ‘blind random chance’, take root and grow?” In other passages, esteemed scientific figures such as Darwin, Asa Gray and Robert Jastrow are quoted entirely out of their proper context.

Based on these grave shortcomings, this book cannot be recommended. A serious reader interested in a text challenging evolution deserves a book of much higher depth and quality.