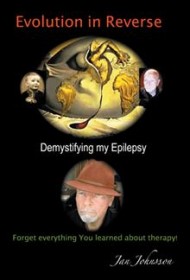 This is Jan Johnsson’s chronicle of his lifelong struggles as an epileptic and neurotic. The title of the book is drawn from Dr. Art Janov, a U.S. physician who pioneered primal therapy, which, as the name suggests, uses the birth process as a means to evaluate, diagnosis, and cure ailments like epilepsy. In Johnsson’s words, “A negative pain-filled imprint can cause lifelong neuroses and act outs that does [sic] not satisfy real needs and the trauma may ultimately develop into physical and mental injuries.”

Such dense, awkward language is indicative of Johnsson’s style. Part of this may be attributed to the language barrier — he speaks six languages — but the complete lack of structure and order of the book suggest otherwise. Readers are given fleeting snapshots of his family early on, but the same descriptions and scenes repeat throughout the text. This is especially problematic in the case of Johnsson’s father, who paid little attention to his son and once abused him badly. Over and over, Johnsson describes the same feelings, the same vignette. This is also true in the way he continually laments the fact that he was born “ass first” and breech, as if his mother had planned his painful, two-day birth.

Johnsson’s historical overview of famous epileptics is interesting, particularly the brief section on Dostoevsky which excerpts a famous scene from The Idiot in which Prince Myshkin describes his moment of seizure. However, grammatical errors abound, beginning on page one (“It is a biography with the intention to avoid getting caught negatively in the aspects of my life and work…”). In addition, Johnsson confuses readers by skipping back and forth in time and place. His rambling will frustrate readers, who are bound to grow impatient with such meandering.

While the premise of primal therapy could be fascinating, Evolution in Reverse lacks all filters, which ultimately makes for a tough reading experience.