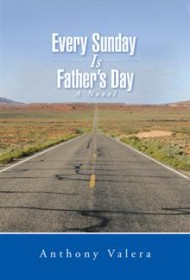 Anthony Valera tackles dark issues in this strangely compelling novel, a gritty story that unfolds after the apparent sexual abuse of a young girl.

Ray Oliver is a frustrated drummer, low on money and self-esteem, whose life is slowly circling the toilet. Although he and his ex-wife Renee fight like cats and dogs, they share custody of their daughter, with Ray having Mickey one day a week—hence the book’s title. When Mickey confides that Renee’s new boyfriend has been touching her, Ray vows to protect her. As he doesn’t have much faith in Georgia’s courts or cops, his solution is to kidnap Mickey and drive to California.

Ray is joined in this hare-brained scheme by best buddy Don Martino, a rugged ex-Marine and Vietnam vet—as was the author. Valero seems to have mined his own experience for his authentic portrayal of Martino, a highly complex, flawed character who is simultaneously tough and fragile. Don’s life is no brighter than Ray’s, and in a doomed bid to salvage something from the wreckage, he also snatches his young child from his ex-wife. Although a road trip with two clueless men, their kidnapped children, and a dog sounds like a comedy, this is a tale where things go horribly wrong.

At times the author struggles to hit the right note with dialogue, which can sound stilted, contrived, or just plain trivial, as at this meeting:

The author is not always sure-footed when moving between scenes and occasionally distracts readers with irrelevant side-stories. At times Valera also includes so many elements that he dilutes the impact of even pivotal passages. Ultimately, many questions go unanswered.

Despite these shortcomings, however, Valera has the writing chops to conjure up some real tension and menace. This is certainly enough to carry most readers through to an unexpectedly desolate ending.