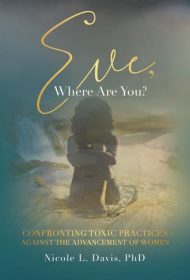 “It is time for the woman’s role to equal a man’s role in relevance and acceptance at the highest levels,” states Nicole L. Davis in Eve, Where Are You? Davis, who holds a PhD in conflict analysis and resolution, is referring mainly to women in the Christian church and supports her contention that they have been unfairly marginalized with arguments from fields ranging from biblical interpretation to social and psychological analysis.

Blaming women’s current unequal status primarily on “the symbolic sanctity of patriarchal governance that has been cherished for centuries,” Davis stresses the unhealthy aspect of a church that is not led by both men and women and points out the damage done to women whose leadership qualities are belittled or unrecognized. “Women who…disclosed to their church leadership that they knew they were called into ministry, [sic] felt immediate rejection, which devastated them.”

The author leans heavily on Christ’s crucifixion for her scriptural support. “He redeemed and restored humankind, both men and women, back to a right relationship with him…” But she also covers myriad other points, including the early churches led by women and the moving story of “the Samaritan woman in John 4:5-14.”

Davis goes on to describe the best ways to implement change in the composition of church leadership, emphasizing that “intentional steps” are needed to effect a difference. In between her analyses, she intersperses comments from elders, pastors, reverends and church-goers, giving first-hand accounts concerning gender and church leadership.

Davis’s approach to this subject is well-organized, thoughtful and carefully footnoted. The narrative suffers a bit, however, from her sporadic use of a passive voice, which precludes a validating discussion. “It is observed,” she states, “that experiences and personalities of women bring a nurturing and comforting aspect to the pastorate.” Observed by whom? A footnote at the end of this sentence does not supply a satisfactory explanation.

Despite this quibble, Davis’s book should find a welcome place on any thoughtful church-goer’s bookcase.