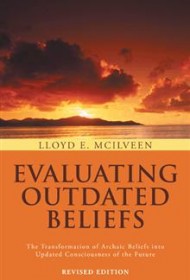 Lloyd E. McIlveen’s book, Evaluating Outdated Beliefs, is not so much a critique of philosophical ideas as an enthusiastic confab concerning religion and belief. What McIlveen appears to be contending in this somewhat rambling and confusing volume is that an individual should base his life on the belief system of his choice rather than uncritically accept the belief systems of his culture. “A belief in anything,” he declares at one point, “is only an approximation; [sic] a guess.”

Because beliefs, he asserts, are for the most part unverifiable, he argues that the individual is free to choose his own credo and that he should follow personally developed beliefs that are positive and self-affirming. Christianity should be rejected as a destructive fantasy that no reasonable person would accept, if he were free of oppressive indoctrination. McIlveen’s position against Christianity is based on a range of objections, from the lack of proof for the existence of God to God’s apparent indifference to suffering and to religion as a cause for wars.

Although some of McIlveen’s assertions faintly echo Kant’s theories of epistemology and Nietzsche’s ideal of the Superman, for the most part, the author’s thoughts are presented in such an opaque and maundering manner that the reader must extrapolate to arrive at his meaning. Sentences such as, “Appearances behold an inevitable monopoly of transformation from outdated and archaic beliefs of simple and vulnerable origin to changing beliefs of the creeping future” do little to further the reader’s comprehension.

McIlveen’s work also suffers from numerous grammatical errors. Run-on sentences, dangling clauses, malapropisms and tense disagreements are common in every chapter. These problems serve to cloud the message the author wishes to communicate. In order to garner an audience, consequently, he would be advised to seek the help of an editor and to engage in a major rewrite.