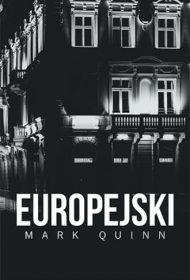 Europejski is a historical espionage novel set predominantly in the 1980’s prior to communism’s demise in Poland.

A decade on, reporter Ewa Kowalska is tasked with investigating the integrity of presidential candidate Michalski by her editor. Ewa’s investigations uncover uncomfortable truths about the candidate’s past and his controversial participation in a student sit-in that ended violently.

Europejski makes dramatic use of the communist-era Warsaw setting to relate its tale of nonconformist campus activism. The period’s deprivation, puritanism, and stifling bureaucracy is painstakingly rendered. The city, and by association Poland, is depicted as a stagnating Russian subsidiary, where both toilet paper and writing paper are luxury items.

In less assured hands, Europejski’s surplus of historical detail might have proved hard going. However, the canny inclusion of international student Tom prevents this. Tom is a sympathetic protagonist whose outsider status makes him relatable to readers and renders his observations accessible.

As an emotionally charged indictment of the impact of totalitarianism on individualism, and the far-reaching consequences of an inherited legacy of compromise, Europejski excels. The author delivers a believable gallery of vividly realized characters, who, pressured by an authoritarian regime, engage in morally questionable activities to safeguard their futures. One such character, Gosia, is coerced into engaging Tom in a duplicitous liaison to spy on his peers. While her actions are well-intentioned, their ramifications prove significant when communism is viewed unfavorably in a future democracy prone to black-and-white thinking.

Europejski is an intricately structured, judiciously paced Cold War thriller a la John Le Carré. It also succeeds as a thematically rich treatise on the nature of history, and how interpretations of it evolve and are re-interpreted with the benefit of hindsight.