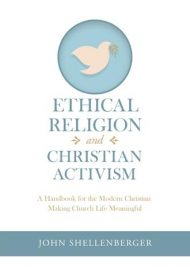 In Ethical Religion and Christian Activism, author John Shellenberger attempts to update religion, removing from it the “super-naturalistic creeds and beliefs of the past 2000 years” and aiming to promote a higher “standard for morality and ethical behavior” among the church community. Throughout, he shares his answer for our world’s “enormous problems.”

Shellenberger, a former pastor with degrees in theology and ethics and political science, describes modern Christians as those who see “a natural or rational explanation” for the miraculous and who view Jesus as “our ethical center” and role model. As such, he notes, we must work with others to “find ethical answers to today’s problems.”

The book’s first half encourages readers to disregard the “superstitions and non-natural beliefs of the past” and urges Christians to aim to be better people and make a better world. The author provides several lists, including ethical questions to address, suggestions for what a worship service should include, and more.

The second half offers compelling and informative discussions about social justice issues, such as: human/civil rights, laws, taxes, care for the environment, the rights of nature, global warming, nuclear power, pollution, and healthcare, including abortion and euthanasia.

The subtitle identifies this as a “handbook.” Thus, readers will expect a tightly organized, succinctly stated, and carefully referenced work that’s easily followed. Unfortunately, none of these are evident. Chapters have mixed and repeated topics and appear to be previously written articles. Some subheadings are duplicated, as are some entire sections.

While the author is clearly well-intentioned, those who adhere to long-held beliefs (Creation, the inspiration of Scripture, the virgin birth, death/resurrection of Jesus Christ, eternal life, etc.), will find much of the material off-putting. And even readers open to the author’s ideas will grow weary of navigating the text’s many technical flaws.