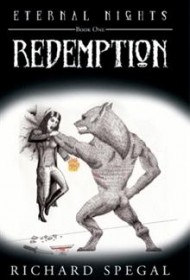 In 1089, John Wolf and his new wife Danielle are attacked on their wedding night and turned into vampires. After this brief prologue, Richard Spegal’s fantasy story picks up in 2009, in New York City, where the centuries-old vampires now live. One night, Danielle is attacked by a Templar in the Sword of God, a secret unit of the Catholic Church dedicated to ridding the world of vampires. With the help of werewolves in the SOG’s army, Danielle is nearly destroyed.

This begins an all-out war between the ancient vampires and the SOG. After hundreds of years of “un-life,” the vampires have amassed extraordinary magical skills, high-tech tools and other resources, such as blood banks staffed by their ghouls (humans they’ve turned into servants by feeding them vampiric blood). The SOG is far-better equipped, however–a global enterprise with all the power of the Vatican behind it. Or so it would seem.

Soon, Archbishop Jenkins begins to doubt the SOG’s mission. When he changes sides, he and the vampires discover that the SOG was believed to have been disbanded years ago. To bring this rogue group to an end, the Pope himself becomes involved.

Alongside the strategizing and high-action battle scenes is the question of the nature and origins of the vampire. John and Danielle are seeking redemption; the Pope and Jenkins hope to provide it.

Spegal offers unique twists in vampire lore, and the logic he creates for his creatures and organizations is well-supported. The writing is basic but serviceable, though it would have benefited from stronger editing. The story’s incorrect paragraphing is sometimes confusing and minor errors are distracting. However, for die-hard fans of vampire stories, this is a fast-paced, high-action tale with originality and an interesting underlying conflict. The questions raised by the end leave the reader curious about what will happen next.