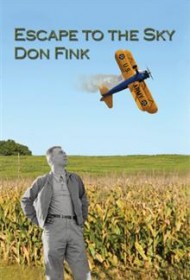 Donald Fink’s novel Escape to the Sky follows the adventures of its protagonist as he becomes a military pilot and sees extensive action.

The story revolves around Ben Findlay, tracking him through his earliest days of learning to fly in Michigan to becoming an American recruit flying fighter planes for the Republicans in the Spanish Civil War. With the advent of World War II, he flies for Britain’s Royal Air Force and later pilots B-17 bombers for the U.S. Air Force.

The novel largely sticks to the aerial action and the effects warfare has on Ben. An air of tragedy hangs over the story (even in its brief romantic segues), and to the book’s credit, it never compromises on that aspect.

Fink’s bio indicates similarities to Ben’s upbringing and experiences, suggesting some autobiographical elements went into the writing. It also notes that Fink went on to become a journalist, and that experience shows. Escape to the Sky reads like the work of a professional writer, albeit one most practiced in nonfiction.

This is evidenced by the fact that too much background is overtly explained through dialogue, and much of that dialogue lacks subtlety. Characters are well defined but sometimes fall back on caricature (the Russians are very Russian, the Englishmen very English).

Still, Escape to the Sky has the structure, flow and pacing a reader hopes for in a novel. It’s engaging throughout, particularly in the numerous dogfights, which are energetically staged. The various situations presented feel believable without surrendering spectacle. For those interested in military flying and wartime air battles, Escape to the Sky will provide a largely satisfying read.