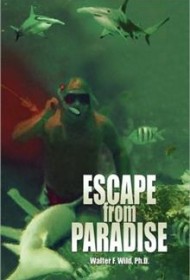 Psychologist Owen Carter has a grand plan to bring love, unity and concerned leadership to the citizens of Oahu. Fellow psychiatrist Lincoln Steadman, however, has deep concerns about Carter’s secretive methods to accomplish his goal after receiving a disturbing call from a terrified patient being treated at Carter’s center. This imaginative, action-packed thriller follows Steadman’s persistent efforts to expose Carter and rescue the patients before Carter can silence him.

This story is told from several interwoven points of view. We see Carter and his colleagues inside his center, forcing drugs, group sex and even brain surgery on unwilling patients in an effort to manipulate people in positions of authority on the outside “for the greater good.” Several frightened patients, meanwhile, work together to plot escapes. On the outside, Steadman and his sidekicks continually seek ways to save the patients and expose Carter while dodging multiple assassination attempts on land and under water.

Wild’s story moves swiftly, and is peppered with credible and interesting details regarding the center’s inner workings. He adeptly employs descriptive native words (with a glossary at the back of the book) and nice visuals of various island settings and people. For example, here is his take on one person Steadman encounters at the center: “The door opened, and a human mountain appeared. Arms thick as thighs, shoulders wider than the doorway, the Samoan plugged the entrance like a boulder.”

The book lacks credibility, however, in the frequent, seemingly deadly attempts at Steadman’s life. He escapes these superhumanly, and, despite severe injuries, manages to continue his quest while barely acknowledging any pain. It is also a stretch to believe Carter can’t find outside backup (A bodyguard? The FBI?) after brainwashed local authorities ignore his pleas for help.

Despite such issues, Escape from Paradise is a fun, thought-provoking ride that will hold most any reader’s interest from beginning to end.