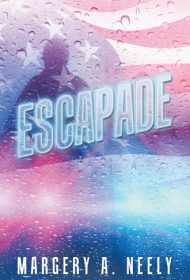 Missouri native Margery A. Neely juxtaposes a spy story, murder mystery, and portrait of a small community facing murder, espionage and duplicity in Escapade, a novel that brings foreign intrigue to America’s heartland.

The novel’s protagonist is Sergeant Phil Tyler, a family man and policeman in the nascent United States Air Force circa 1952, as the Korean War comes to an end. His new posting at a base south of Kansas City comes with headaches: most immediately, a dead body wrapped in a tarp, seemingly run over by an airplane. Simultaneously, a local woman living near the base appears to have drowned in the nearby river.

Many mystery novels aim for velocity, accelerated by terse writing and dubious plot twists. Neely takes a classical approach in the vein of Agatha Christie or Jacqueline Winspear. The novel’s leisurely pace dampens the tension, but it leaves breathing room to explore a plethora of characters, from obstinate local police chief Manny Burdett to an evasive Korean servant, not to mention a cadre of insubordinate ROTC cadets and a mysterious airman whose presence lingers over both cases.

Refreshingly, the author gives Tyler an unexpected partner every bit his equal—and more. His wife Donna could have been portrayed as a token housewife but instead emerges as the driving force in connecting the dots between the puzzling deaths and a stable of suspects. “You’re a trooper; my very own support team and best aide-de-camp,” her husband admits.

This is not an edge-of-your-seat page-turner, but there’s something comforting in Neely’s measured and methodical storytelling, punctuated by rational and precise prose and realistic, convincing characters. There’s no denying it’s overstuffed, not only with the primary investigation but also with unrelated cases and familial dramas that add to the book’s portrayal of small-town America but don’t always contribute to the fundamental mystery.

Nevertheless, this historical whodunit should satisfy not only fans of police procedurals but also readers who yearn for days gone by.