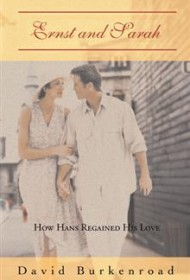 Ernst and Sarah combines two stories. The first, written as historical fiction, predominantly takes place in Germany and the U.S. It centers on the lives of Ernst, Hans, and the woman they both loved, Sarah. The latter, a contemporary work set in California, tells of the love and struggles between Jacob, the great grandson of Sarah, and Carol.

The book opens with an overview of Ernst Kroll, a West Berlin Jew who had been beaten by the Nazis and seeks revenge for it, despite the risk of losing his life. Early on, he meets Sarah at a party, then quickly beds and marries her. Hans, Ernst’s best friend and also Jewish, happens to hear Sarah’s beautiful voice, and falls in love with that voice. But he is saddened to learn that Ernst wins Sarah over first.

Hans goes on to become a sculptor of Nazi propaganda in order to survive. At one point, he asks Ernst if he can sculpt Sarah, and Ernst agrees. Unbeknownst to Ernst, the two form a bond. Later, Sarah finds her way back to Hans, and the couple heads to America to start a new life.

The second story covers the marital troubles between Jacob and Carol, who met at the University of California, Berkeley, and found that they both had descended from Jews who evaded Nazi death camps. The marriage crumbles when Jacob forces their housekeeper, Mirasol, to have sex with him, a situation that creates more drama.

There’s much going on here, but most of it is jumbled and confused because the author continually rambles back and forth through time and repeats story details over and over again. While the book benefits from the addition of some historical details and occasional references to works by authors such as John Steinbeck and William Faulkner, the story lines falter from the tangled telling.

In short, Ernst and Sarah proves too muddled to attract interest.