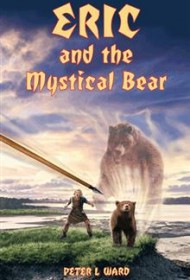 In this conclusion to Peter L. Ward’s fantasy trilogy, a group of teenage Vikings are determined to get along in the Saxon village they now call home. This is no easy task, given the hostility and mistrust between the villagers and the newcomers.

One night, Eric Bignose discovers a terrifying creature in the forest. After it kills a full-grown bear, Eric adopts the orphaned cub, which accompanies Eric and friends as they seek help from a wizard in the forest. The wizard informs Eric that the cub will someday protect him (which it does in surprising ways). Eric’s visit to the wizard causes a clash between the new Christians and the pagans in the village, and when the dreadful creature of the forest appears in town, the villagers believe they must banish Eric to be safe.

After Eric leaves, his Viking friends decide they must go, too. They find him and plan to return to their homeland. After encountering many magical creatures and surviving multiple obstacles — natural and mystical — they are eventually reunited with their families.

While the plot is inventive and action-packed, confusing inconsistencies and a lack of character development weaken the story. Perhaps because this is the third in a series, the author expects readers to know the characters from the previous books. More problematic are the missteps: for example, midway through the book, a new character suddenly appears onboard the boat after the children have been at sea. Contradictions also abound: When informed of the encounter with the creature, the wizard tells Eric that he has been “tempted by great evil,” but there is no evidence of temptation, only terror. The children decide they want to leave the village but then are “devastated” when told they should leave.

Despite all this, some middle-grade readers will likely bypass these issues to find out what happens to the children on their exciting journey.