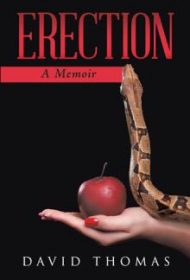 David Thomas’s memoir concerns his life as a baby boomer who followed his sexual inclinations to the exclusion of love. Despite its eyebrow-raising title, this is a mature, reflective delight to read.

Thomas writes in spare, organic prose about growing up in postwar America with parents who never demonstrated affection for one another. He marries the first girl he has sex with when she becomes pregnant, and they move repeatedly as his professional life demands. While he and his wife are polite but disconnected, their daughters give him a glimpse of what love is. But eventually infidelity, divorce, addiction, and ostentatious wealth make a mess of things. Only in his third marriage does he begin to fully develop an equal partnership based in love and respect.

There’s no blame cast in this story that isn’t shared. Thomas is honest about his mistaken assumptions, like the ways he tried but missed the mark with his second wife as she succumbed to alcohol and drug addiction or the belief that his daughters would rebound easily from their parents’ divorce. (In one excruciating moment of self-awareness, he admits the irony of giving his daughters—while in the midst of divorcing their mother—wall-hangings that offer this life guidance: “‘It’s Always Better Not to Make a Commitment Than Not to Keep One.’”)

While Thomas uses the clunky phrase “crotch thinking” a few too many times, it’s forgivable, as he never ignores his missteps on the way to pursuing short-term satisfaction with little thought for the consequences.

The title of this book has shock value, but it’s inaccurate. Erection: A Memoir isn’t about a body part. Rather, it’s the story of a whole man who was very much a product of his time. With self-criticism and compassion offered in equal measures, the narrative provides a thoughtful and compelling reading journey.