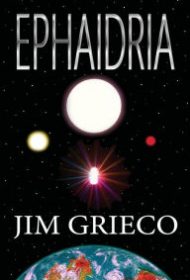 Author Jim Grieco, an Emmy Award-winning director of photography, works hard to invest his fantasy novel Ephaidria with all the drama and action of a prime-time television show. His debut novel boasts the heft, complexity and scope of any notable epic fantasy work, while largely maintaining a cinematic mood.

Written in present tense with short, punchy chapters, the novel delivers a central plot rooted in the fate of a faraway star system of four planets known as Ephaidria, worlds inhabited by eight civilizations that include a race of bird-like creatures, a population of feline freedom fighters and primordial humans living underground.

When a group of abducted humans who have been transported from Earth to Ephaidria are threatened by evil entities intent on consuming their energy, their only hope for rescue comes in the form of four heroes from Earth, teenagers possessed with paranormal, clairvoyant and physical powers. The quartet from around the globe is transported across the cosmos to Ephaidria, where they combat ethereal enemies and meet a host of colorful alien characters.

Grieco invests his tale with an impressive amount of detail and imagination. The worlds of Ephaidria are populated with a vast array of intriguing and engaging characters, and the novel’s four heroes are instantly compelling. The author’s writing style is vivid, which helps propel the story through some of the denser stretches of explanation and background.

Those sections aren’t always easy to navigate. It takes a good 100 pages before the protagonists learn of their quest and arrive at Ephaidria, and much of the first part is heavy with exposition, explanation and dream sequences. Although the slower stretches may dissuade some readers, the payoff comes in the final segments that take place across the cosmos.

It requires a bit of patience, but Grieco finds a way to make all of the complex narrative strains work. Those who persevere will be richly rewarded.