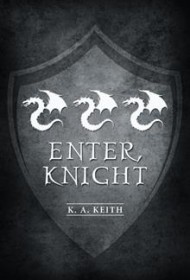 Author K.A. Keith is well acquainted with the narrative tradition of the Hero’s Journey. His epic fantasy debut Enter, Knight, incorporates all of the essential elements of this story structure, which has played a key role in tales ranging from prehistoric myths to the seminal works of J.R.R. Tolkien. Keith takes the basic cues – a protagonist snatched from a life of relative ease to undertake a grand adventure – and adds a painstaking amount of detail, intrigue and commitment.

Across nearly 600 pages, Keith spins an in-depth yarn about a faraway country called Ilycrium, a world threatened by forces of evil and fantastical monsters. Two protagonists hold the keys to saving the realm from primordial forces of evil, and both fit the mold of the unlikely hero. The knight Apieron Farsinger is a 30-year-old veteran of past conflicts with a wife and children; Adestes Malgrim is a battle-tested warrior and an assassin in a mysterious cult. Both must take up a call to fight malevolent forces bent on destruction, as hapless princes, warrior priestesses, elves, dwarves and a host of characters take part in the struggle.

Keith plays on timeless narrative structures and incorporates characters familiar to any fantasy fan in spelling out his narrative vision. All the while, he employs a depth and detail that sets Enter, Knight apart from a boilerplate genre work. Keith’s experience as a medic shows in his keen eye for detail in spelling out battle scenes and painting vivid action sequences. Along with a meticulously plotted mythology and a rich vision for his imagined Ilycrium, the author’s complex language helps set his work apart.

Enter, Knight is a dense debut, and its level of detail may be tiring for genre newcomers. For those who love the intricacies of Tolkien and the grittiness of the Song of Ice and Fire series, however, this novel is an admirable entry into the world of fantasy fiction.