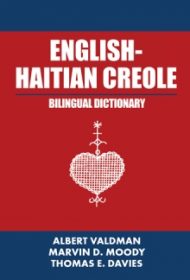 Haiti has the worst life expectancy in the Western Hemisphere. Two out of three people there live on less than $2 per day. An earthquake in 2010 killed some 300,000 people and cleanup is still going on. What does this have to do with a dictionary?

Simple. Creating a new and comprehensive dictionary for a mostly spoken language that’s as complex as Haitian Creole can only be described as an act of love because there’s certainly no big payday in doing it, even though it surely will be valuable to aid workers and “scholars in a variety of disciplines,” as the book cover notes. In light of this limited audience, it’s appropriate that the cover illustration is a simple line drawing of a heart —a simplified symbol of Erzulie, a vodou quasi-patron-saint of love and prosperity.

That said, true logophiles will find much to appreciate here, especially those who understand and appreciate the subtleties of English, and want to write or speak accurately to some of the 11 million people who speak Haitian Creole.

The authors are supremely qualified, hailing from the Creole Institute at Indiana University. Their academic background serves them well, as the headnotes, orthography, grammatical sketch and helpful user’s guide are top notch. And in the heart of the work, the definitions are complete and comprehensive.

The word “run,” for example, has in recent years surpassed “set” as the word with the greatest number of definitions in the Oxford English Dictionary. In this work, there are two pages of translations for “run” compared to a page and a half for “set.” That’s just a rough, but telling, guide to see if a dictionary is keeping up with the times, and in this case, the work clearly passes the test of remaining current while also building something that will endure.

In all, the authors can be proud of this exhaustive work. Any English speaker wanting to communicate with natives of Haiti will find this dictionary indispensable.