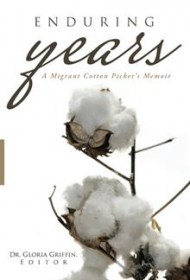 Even after slavery officially ended in this country, untold thousands of African-Americans remained beholden to white landowners as sharecroppers.

Enduring Years: A Migrant Cotton Picker’s Memoir are the reminiscences of Billie G. Griffin, grandson of a former slave, who through sheer determination and back-breaking hard work, scraped together a meager living during a time of segregation and crushing poverty in rural Oklahoma. From the beginnings of the 20th century, through the Great Depression and into the Civil Rights era, Griffin had a knack of finding work, even if for a few dollars a day, and even if it meant moving countless times in search of a job to support his wife and their nine children.

Yet as he took odd jobs far from home, picking cotton was in his blood, passed down from grandfather, to father, to son. The lure of the cotton plant seemed to always take him back to the fields of Oklahoma.

The book is a compilation of the stories Griffin wrote by hand and eventually handed off to daughter-in-law Dr. Gloria Griffin. As an academic, she dutifully annotates the people, places and historical context that were part of his 91 years. While helpful, the many footnotes are distracting. It’s understandable that she does not want to interfere with his words, but it would have been a richer book had she found a way to weave the two together more seamlessly.

Griffin accepted the many hardships he faced in life without bitterness. “We just laughed it off,” he would say. (An exception was in the 1950s when his son had to travel to a segregated school although there was a high school just down the street.)

The memoir is not a polished piece of writing. It starts strong, but eventually feels rushed and lacks the storytelling detail and arc readers crave. Still, the book has importance, as it offers a glimpse into a life well lived from a perspective rarely told.