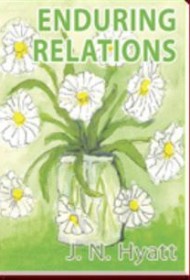 Enduring Relations is the story of a family as they gather for a funeral and a wedding, told chapter by chapter in the alternating voices of each of the women characters. Each woman reveals her secret thoughts about the rest of the family, weighing and measuring them against her own happiness or disappointments, often with humorous results.

These are not sophisticated, big city characters a la Sex in the City, but rather women who have spent most of their lives in a small town. Garet, the stalwart stay-at-home mom, is the mainstay of the family. Not only must she cope with her beloved father’s sudden death, she has to comfort the rest of the family. Everything is in flux: her newly widowed mother is a not-so-secret alcoholic; her father’s business is apparently bankrupt; and her 22-year-old daughter is upset that the funeral might interfere with her wedding.

After hearing each character speak, the reader is left to wonder whether Garet’s choices were the right ones, contrasted with the others: Is it better to be the independent career woman who remains unattached? The flighty divorced woman who needs a man to complete her? The single mom, pulling her life together? The young bride, confident that she has all the answers? Although it’s unclear what year the book takes place and there are moments when it feels a little dated (a boom box? a VCR?), the issues are still relevant in 2012.

This would be an excellent novel for a book club discussion. As each character comments on the proceedings through gossip, innuendo, criticism, and envy–in other words, the stuff of family relationships–readers will find a debate that still endures.