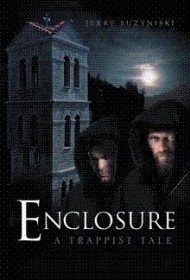 Enclosure is a harrowing tale of a young man whose attempts to overcome both his genetic mental illness and sexuality prove not only futile, but tragic.

When Andrew follows his vocational calling to become a monk, he assumes a life dedicated to celibacy, modesty, and prayer will tame his biological urges, mend his mental well-being, and prevent tragedies. But as he soon discovers, none of these notions prove true.

Father Martin’s untimely death, for example, occurs within weeks of his arrival, and a short time later, he witnesses the aftermath of a suicide. Within a few months, Andrew also realizes that monks are far from perfect. Father Jude, an eminent and long-serving member of the monastery, drives a Peugeot, engages in casual romances, and eats meat despite the implementation of an exclusive vegetarian regimen.

Andrew soon finds himself at the center of transgression through his own sexual encounters, specifically his relationship with Brother Matthew, whom Andrew grows to love. But when Andrew doesn’t cross certain sexual barriers for fear of undermining his religious calling, Matthew leaves him for a woman. Meanwhile, Andrew cannot reconcile his spiritual longing with his sexual inclination, which causes severe mental anguish and eventually, total mental breakdown.

Author Jerry Buzyniski spent two years in a monastery and 28 years as a psychiatric counselor, and he utilizes his wealth of experience to create believable characters and an authentic backdrop with which to tell his story. The book isn’t without its flaws, namely dialogue that’s nearly indistinguishable from the cadence of the narrator, and the novel’s 676-page length. The story could lose portions of plot sequences without detracting from its themes.

Even though the book’s brutal ending seemingly erases the feelings of hope and acceptance that permeate the story, it’s nevertheless poignant within its melancholy, offering a satisfying conclusion to an ambitious work.