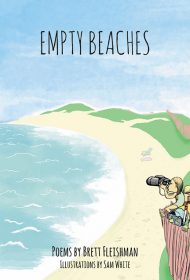 In these pages, Fleishman covers a variety of topics, delivering 25 poems mostly driven by a desire to amuse. Usually this comes as a result of a clever pun or idiom in the last line; phrases like “raised the bar,” “throw him under the bus,” and “chip on his shoulder” are used with weightlifters, bus drivers, and potato chips to humorous effect.

The language in Empty Beaches is more challenging than Fleishman’s other pun and idiom-driven poetry books, and can be seen as a natural progression for readers who enjoyed those, or a good starting point for older children. For example, the two-line poem “Mr. Exaggeration” reads: “My Dad says I’m so, so, so, so, SO, so melancholic/ Am I really sad or is Dad way too hyperbolic?”

Also challenging are the three “Zany Word Blender” puzzles Fleishman uses to provide respites from the poetry. Here, he asks readers to pick out words hidden in sentences, and it’s harder than it sounds. For example, given the clue “soccer,” the sentence “Long ago Alex tried” yields the word “goal,” taking “go” from “ago” and “al” from “Alex.”

In the appendix, Fleishman explains the tools of his trade: homonyms, puns, and idioms, with a breakdown of each poem that uses them. It’s this expert combination of entertainment and education that makes Empty Beaches so unique.

While White’s illustrations are uneven (some don’t particularly stand out, but others are eye-catching, such as the picture showing a tug-of-war between fish and steaks on a grill), each full-color image is more than adequate to capture the idea of a poem visually.

Overall, Empty Beaches is an enjoyable book and an excellent tool for those learning the many strange and delightful eccentricities of the English language.