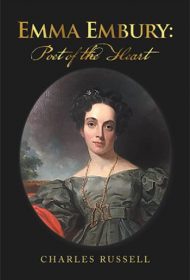 Although she’s unlikely to make anyone’s top 20 list for female writers of the century, Embury was prominent in her time, selling, as Russell points out, “more than three hundred poems, romances, fiction and humor pieces” to publications such as the Ladies’ Companion, Graham’s Magazine, and Edgar Allen Poe’s Broadway Journal.

The author also reprints a generous selection of Embury’s poetry. Her verse is usually structured with rhyme and rhythm and reflects an emphasis on nature, abstracts, morals, and ideals characteristic to her era. Some, like her poem, “Peace,” show a kindred spirit to Longfellow: “O seek not in marble halls of pride/ Where gushing fountains fling their silver tide/ Their wealth of freshness toward the summer sky …”

Russell covers major events in Embury’s life, such as her marriage, two European trips, the editorship of two publications and the birth (and death for some) of her children. He also skillfully explores her literary life, with an emphasis on Byron and Madame de Staël, thoughtfully showing how they inspired Embury. He only dedicates a few pages to the salon, however; more information on its members would be helpful.

Russell also sometimes descends into the language of romance writers (“Instinctively their lips parted and their tongues joined in the kiss”), detracting from the solidity of the whole.

Nonetheless, this is an interesting book that fills a void in the history of American literature. Readers should find Emma Embury a worthwhile read.