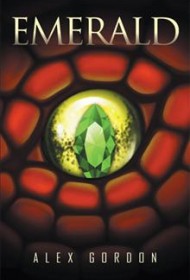 Alex Gordon envisions a world where humans and mythical beasts interact in nearly every phase of daily life.

In his ambitious fantasy, Emerald, humans share their everyday routines with dragons in an imagined world that represents a vague version of the Middle Ages. Like most fantasy works, Gordon sets his action in a faraway realm marked by epic battles and heroic quests, as well as dingy taverns and uncouth characters. In a setting known as the Valley of Tears, dragons speak and toil side-by-side with humans.

Here, Gordon’s anonymous protagonist, a character referred to initially simply as “a young man,” follows his quest for identity and purpose. He eventually becomes the driving force of the book, as Gordon reveals a backstory of the “young man,” called Akron, who has been left alone by parents and loved ones and is living as a vagabond. When Akron connects with the kindly dragon Emerald, the familiar fantasy trope of an unlikely character seeking redemption through an epic quest ensues. Akron and Emerald get caught up in a struggle against evil stretching back millennia.

Gordon follows these familiar cues with an obvious passion for the genre and a skill at setting vivid scenes. He invests Akron, Emerald and the rest of the characters with impressive amounts of life, and he describes battles with a fine-tuned attention to detail.

Those highlights, however, come with some shortfalls. Gordon narrates the entire tale in the present tense, and this style can wear thin, particularly in a tome that runs more than 400 pages. Also, Gordon isn’t shy about relying on explicit language straight from the 21st-century in some of the book’s bluer moments.

While the book’s sluggish moments keep this fantasy from reaching a truly great status, Gordon’s efforts are impressive. The book offers an interesting twist on the fantasy formula, and fans of the grittier takes on the genre are sure to find something to appreciate here.