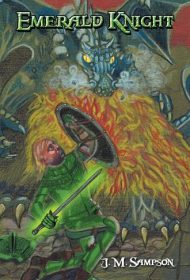 Indeed, Germaine of Scot Hold cleaves as closely to the archetypal knight in shining armor as one could imagine: He’s a dedicated hero-for-hire who offers his “liege oath,” or protection, to those with noble causes. Wielding legendary armor and deadly arms, Germaine is a wandering Christian soldier in a pre-Christian Britain, and the author offers not-so-subtle ties to the narrative structure and strains of King Arthur and Camelot.

Lady Estella Merelda is the story’s damsel in distress. After the mysterious and violent death of her parents, Estella is the newly crowned ruler of Lyon Hold. Suspecting foul play in her parents’ deaths, Estella’s servants convince her to secure the services of Germaine to protect her from further threats.

Those threats, it turns out, stem from Lord Scul Craitor, a villain intent on seizing control of the entire realm, including Lyon Hold. He finds his plans waylaid, however, when Germaine arrives at Estella’s side. As for Germaine, his life has been upturned by his wife’s death, and he now experiences rapidly growing feelings for Lady Estella.

This romantic subplot unfolds as Scul makes a play to eliminate Germaine and seize Estella’s holdings with the help of the dragon Iron Hide. Meanwhile, a sorcerer offers seeming support to Germaine while pursuing a hidden agenda.

Sampson weaves these standard fantasy elements into a relatively short framework. His tale flows nicely, with an easygoing, fast-paced narrative style. Sampson uses vague references to the history of Britain—the arrival of Christianity, the legacy of the Romans, etc.—to anchor the stories of dragons, magic and knights in a more recognizable world.

Emerald Knight isn’t likely to reinvent the genre, but it achieves its goal admirably. Sampson offers a heartfelt tale of heroism sure to appeal to fantasy fans and lovers of old-fashioned adventure alike.