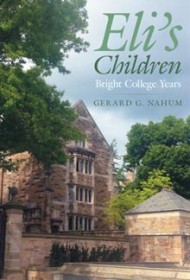 This nostalgic novel, seemingly based on the author’s undergraduate years at Yale—thinly disguised as “Laurelton”—is  observant and elegantly written. Many of Gerard G. Nahum’s fellow alumni will likely recognize his detailed reflections on the intellectual challenges, social hurdles and growing pains his character faces in leafy New Haven, here called “South Winford.”

Nahum’s book reads more like memoir than fiction, and his view is Ivy League to the marrow, beginning on page three with young alter-ego Joshua Clafston’s insecurities about excelling at a “prestigious institution” inhabited by “the best and the brightest.”

Not to worry. From his gentle, freshman-year wrangles with a snobbish roommate from Illinois and another, from San Francisco, who’s a callow pseudo-Communist, through his late-night sweats over a senior-year paper on thermodynamics, we behold Joshua as generally triumphant amid the changing weathers of college life: drunken singing, romantic experimentation (“we slid very quickly down the path to intimacy”), classroom trauma (“I was lost at the level of the basics,” ) theological debate and self-doubt (“How could I ever be as wise, as learned, as self-effacing as the great men I’d seen on the lecturn?” he asks).

Eli’s Children scrupulously recreates the Yale experience, and that’s its main strength. It also has faults. It is earnestly stuffed with bland detail: The author’s reproduction of the entire text of a dean’s address to the incoming Laurelton freshmen—nine pages’ worth—may test the patience of the bluest Yaley. Clafston also slips too easily into stiff formality, as when he feels “a twinge of remorse for usurping the prerogatives of two people I hadn’t met yet.”

Still, there’s a keen mind at work here, ably recalling a rather proper young man’s formative years. At the least, this carefully written story deserves a place in the library on the storied Yale campus Nahum reveres.