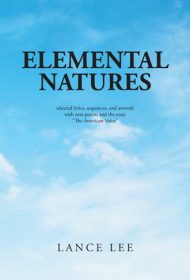 Lance Lee has only one poem dedicated to Henry David Thoreau in his prodigious poetry collection, Elemental Natures, but his literary sensibilities are much akin to Thoreau’s.

The book is comprised of mostly free verse and uses nature as a metaphor or backdrop for man’s actions, or simply describes nature itself. Like Thoreau, Lee could have been a “self-appointed inspector of snow storms and rain storms.” This makes for some beautiful poetry. Take, for instance, these lines in “Autumn”: “Austerities of bright space flood the East/ metallic sunsets burn the West—/ one noon the sea wears the thin, brief glitter/ of a mayfly’s wing.”

In Lee’s poetry, nature can stand not only for man, but one man can exemplify all men. “We are so wound in nature,” Lee asserts in “Blood Rhythm,” that “I find no boundary between inner and outer,/ us and others, me and you…” Resting on this universality, Lee’s pieces explore topics ranging from Greek mythology to coyotes and wolves to Walt Whitman and Robinson Jeffers, Armageddon and Dachau.

Most of the poems are deeply layered with imagery, as in: “Light wheels across the shore-hugging sea:/ rain falls with a thousand years’ despair/ and the downs hood their heads with dark mists.” Some of the poems like “Opossum’s Death and What Happens After” and “Dachau” force a steady look at what the mind would rather turn from. Others present themes poetry often returns to (“Who sees me for what I am?” and “…this repetition/ of what we have known is all there is/ of bulwark and meaning and measure…”).

Occasionally, Lee’s imagery falters (i.e. “a patina for muscular stars,” and “until bats of light strike my shoulders”), and some passages are opaque. Most often, though, his poems move with the clarity he discusses in his The American Voice essay at the back of his book.

In all, Elemental Natures should be a welcome addition to any poetry reader’s shelf.