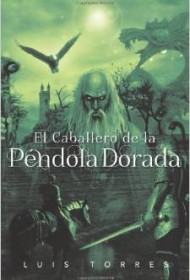 This adventure story, for both young adults and adults, is set in the times of Charlemagne, a cruel king whose army does away with whole villages. Many years earlier, in order to help defend the poor and weak from tyranny, the wizard Merlin creates a magical suit of armor for the knight referred to in the book’s title, one that cannot be removed.

Ryan, the young hero of this story, sets off with four friends to search for the knight to ask him to defend his people. Along the way, all his friends die: one falling to his death from a hanging bridge that breaks; two killed by soldiers; and one drowned in quicksand. Ryan finally locates the knight, who tells the younger man that he is tired of using the armor, but that he can’t remove it without someone’s help. When Ryan liberates him, the man inside the armor disappears and Ryan takes his place in order to avenge his people.

While the plot sounds promising, the author unfortunately gives away too many hints of what’s to come; what could have been an engaging story falls flat because the plot and characters are predictable. In addition, the author presents distracting errors in spelling and grammar, such as repeatedly writing acecinada instead of asesinada (murdered) or using vez (time) instead of ves (see). And, inexplicably, the book begins with two short stories that have nothing to do with the novella.

There are also factual errors that should have been avoided with some basic research. For instance, in one scene, the author writes that a European river had piranhas, fish that are native to South America, and, in some battle scenes at the beginning, he has Charlemagne yelling “fire!” in an era when there were no firearms.

In sum, only after a rewrite to thicken the plot and further develop the characters and situations will this novella have the potential to charm its readers.