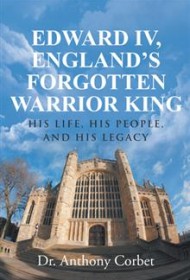 Since the discovery (September 2012) and reburial (March 2015) of Richard III’s remains, scholars have been reconsidering the much-reviled English king’s era and milieu.  Anthony Corbet’s Edward IV, England’s Forgotten Warrior King adds to this familiar corpus, using the life, achievements and death of Richard III’s brother, Edward IV, as the magnetic pole from which all the other historical filaments— acts of treachery and despair, wars, murders, and conspiracies—extend.

Corbet’s stance concerning Edward IV is unequivocal.  He lauds the king’s heroism, battle tactics, political acumen and governing abilities. He favorably compares him to his predecessor, the oft-times unstable Henry VI, and to Richard III, who most likely murdered Edward’s two sons to obtain the throne.  In order to make these comparisons — and to give the necessary background on the Wars of the Roses, and weigh in on the critical opinions of other authorities — Corbet divides his book into several sections which include discussions pertaining to canon law, the genealogy of the York and Lancaster houses and the contemporaneous rulers of Burgundy and France.

Because of this structure, Corbet’s monograph reads more like a handbook to the York and Lancaster conflicts than a linear account of a ruler and his legacy and is hampered by repetition.  For instance, Corbet informs readers several times that Edward IV was good at remembering names, and twice discusses Alison Weir’s theory concerning the timing for the murder of Richard III’s nephews.

In addition to this somewhat wearying repetition, Corbet often eschews opportunities for compelling description in order to pursue closely reasoned arguments on various historical controversies, leading to a dense and academic narrative. General readers may be stymied by a plenum of dry details. Corbet’s foremost audience, consequently, will be the amateur experts and academic pundits who hold positions on his contentions. They will find the book worth a look, despite its sometimes arduous exposition.