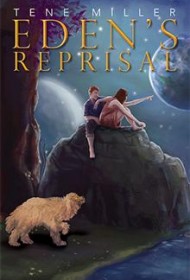 Set partially in modern-day east Texas, the storyline of this science fiction adventure—the sequel to Tene Miller’s debut Eden’s Allure—is comparable, at least in broad strokes, to Harry Harrison’s classic Deathworld trilogy: A person with supernatural abilities (in this case, the egomaniacal Dominique) has teleported herself and others to a planet (Eden), where she hopes to not only to become insanely rich (by mining high quality gold) but also to become the planet’s sovereign ruler. The planet, however, like the one in the Deathworld novels, turns out to be extremely hostile, with a plethora of carnivorous flora and fauna, deadly natural phenomena, and so on.

In this story, those who Dominique has essentially kidnapped from Earth to help in her endeavor eventually begin dying gruesome deaths. The tension increases until the survivors must make a critical decision: complete the mission or revolt against Dominique and somehow return home.

The narrative boasts several bright spots. The writing is fluid and the pacing brisk; a plot thread following mutated dogs that have been inadvertently teleported to Earth is interesting; and the love relationship between a character who served as a guard for Dominique on Eden and a veterinarian almost singlehandedly powers the story. Although the conclusion is a little outrageous, it sets the stage for yet another Eden novel.

But the story is hampered by unfortunate missteps. One of the novel’s fundamental flaws is that it offers few specifics about the first installment: Those who haven’t read Eden’s Allure will never really understand what occurred beforehand. Additionally, the storyline isn’t original (with numerous similarities to Harrison’s trilogy) and full of gaping holes. For example, if Dominique is so supernaturally gifted, wouldn’t she be able to find a much easier way to achieve monetary gain? And why return to a planet so obviously perilous?

Despite all, Eden’s Reprisal is generally entertaining, though ultimately unlikely to stick with readers once the last page is turned.