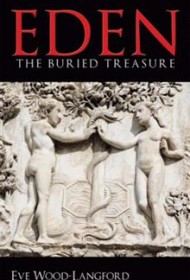 Eden: The Buried Treasure is an ambitious book looking to shed light on the story of Adam and Eve through the lens of modern feminist theology. Tracing the tale’s origins back to the Epic of Gilgamesh–written, by some approximations, 400 years before the Old Testament story–author Eve Wood-Langford argues that the Eden myth has been obscured by over 2,000 years of dogmatic interpretations focusing primarily on sin and foregoing the original intent, which related to the importance of the Mother Goddess in creation. One of the main proponents of this construal was St. Augustine, whose 4th century theology radically influenced how Christians looked at sex, desire and evil. His misreadings, Wood-Langford contends, have had detrimental effects on the role of women throughout the centuries.

Though many theologians, feminists and anthropologists have made similar arguments over the last 100 years, Wood-Langford approaches her material as if she’s discovering it for the first time. In the process, she brings great energy to the discussion, and for readers unfamiliar with the scholarship of the last century, the book may serve as an informative postmodern introduction to the Genesis story.

The book is not without flaws, however. Wood-Langford is a solid writer, but she tends to over-generalize, which undermines her argument. For example, she rallies against those who ignore theological subtleties, but opens the book with this sweeping comment: “For almost two thousand years the Genesis creation story of Adam and Eve has been interpreted in Christian monotheism as literal truth.” This isn’t true. Though in the last 150 years, the rise in Christian fundamentalism has, at times, attempted to wipe out nearly two millennia of theological thought, many Christians throughout the centuries have identified this story as an interpretive, rather than literal truth.

Still, Wood-Langford should be praised for the passionate work she’s done here. Her book will reveal great wealth for newcomers looking for an unorthodox approach to the Adam and Eve story.