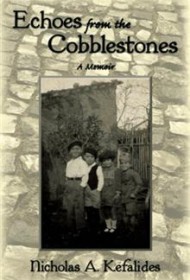 Echoes from the Cobblestones looks back at Nicholas A. Kefalides’ life, with the major focus on the war years and their impact on his family.

When Kefalides was growing up in Greece in the 1930s, the story of his life with childhood friends and a close, loving family reads like an affectionate snapshot. But as World War II began, Italy’s attacks on Greece visited violence and hunger on the family.

“All the students entered their designated classrooms and without much fanfare our teacher informed us that the school would close indefinitely. We were dismissed and told to go home.” This perfunctory description of what happened in the wake of Italy’s first attack on Greece is a fine example of Kefalides’ writing at its best: economical and dramatic in equal measure. Despite the numerous hardships that came with war, he mines the experience for humor, relating brief failed stints selling cigarettes, candy and books on the street, then running a wheel of fortune game until a drunken patron smashed the wheel in a fit of pique after losing. Kefalides survived the difficulties and eventually came to the United States to study medicine.

The book is best focusing on the war; readers unfamiliar with Greece’s involvement will learn a great deal. Once Kefalides resettles in the U.S., marries and begins his family and career, the stories are less vital and engaging, though it’s nice to know he survived the war and made a good life for himself.

Echoes from the Cobblestones – the title refers to the noise made by German soldiers’ boots as they patrolled the streets – gives readers a solid sense of the impact war can have on a family and the ways family members can heal together in peacetime. It’s a worthy testament to a life well lived and a rare look at the Greek experience during the war.