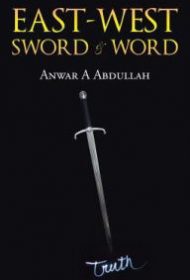 In a famous passage in the Gospel of John, Jesus tells Pontius Pilate, his eventual executioner, that he has come into the world to be a witness to the truth. Pilate famously retorted, “What is truth?” That search for an understanding of truth is at the heart of Anwar A. Abdullah’s East-West Sword & Word, a prodigious, thoughtful work that explores the intellectual traditions of the great religions and cultures of Europe, America, Africa and Asia.

In numerous essays, the author waxes philosophical on a diverse set of topics, including science, world politics, poetry, cloning, futurism, myth, mysticism and the “all-absorbing fear of death and the compulsion of immortality.” Referencing such diverse thinkers and writers as Shakespeare, James Joyce, Rumi, Omar Khayyam, Zarathustra, and Henry David Thoreau, to name just a few, Abdullah’s book is in many ways a compendium of great insights on the struggles of the human condition where “reason stops at modernity’s gate.”

Of all the muses in Abdullah’s work, the spirit of Bengali poet and novelist Rabindranath Tagore is felt most deeply here.  The author quotes the Nobel Prize winner no less than 40 times. Both writers are troubled by what Tagore calls “the dark winter of inhumanity,” and each sees the need for “beauty and kindness” as a way of leading us to “the unity of knowledge.”

Abdullah is a big thinker and intelligent writer. His book is a testament to the holy longing of bringing our temporal world of sensations, feelings, and thoughts in union with the invisible world of wisdom and justice. It’s beautifully wrought and poetic, although, like many philosophical works, it often wanders into abstraction, as in: “This tendency of a dramatic shift into the extremities of both ends is the result of a constant resistance to accept nothing less than a material source of perception.”

Nonetheless, for those interested in a search for wisdom amidst the tumultuousness of our contemporary world, this book will not disappoint.