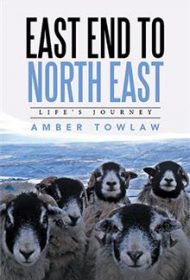 East End to North East: Life’s Journey is Amber Towlaw’s story of “an ordinary guy” growing up in London’s East End and making his way in the world.

It’s difficult to offer a robust summary of the book, as the author’s writing is convoluted and a challenge to understand. In broad outline: Towlaw describes working on a farm as a young man and shares stories from family vacations, including one when their caravan was swamped by the flooding Thames; the family had to be rescued from the rising waters. He recalls experiences hang gliding and a period of work with either the police or military; it’s unclear which.

The book has no chapter breaks, and many of the narrative’s paragraphs continue for a page or more. The memoir is also characterized by spelling and punctuation errors and innumerable run-on sentences. For example:  “The journey up the my [sic] was terrible the trailer was so old I kept losing wheel nuts, the holes elongating so I had to keep taking ones from other wheels this happens so many times I got to Carlisle with two on each wheel I stopped where I could at the base parked the trailer and told them not to move it, did they listen by [sic] time I had a cuppa tea they were moving it, well only about two hundred yards two wheels splayed out…”

While there are flashes of welcome humor and character in the narrative, and it’s possible to divine some meaning from such passages if the reader concentrates carefully, the onus should not be on readers to work so hard.

Should Towlaw choose to work with an editor and significantly rework this material, he may well have an engaging story. As written, though, East End to North East: Life’s Journey is much too hard to follow to appeal to readers at large.