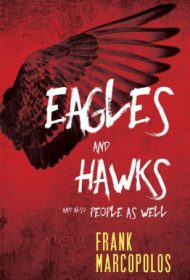 A young man with the weight of the world resting on his shoulders is the focus of the excellent novel Eagles and Hawks and Also People as Well by veteran author Frank Marcopolos.

Enzo Prinziatta’s father has died unexpectedly, his girlfriend is pregnant, and he’s trying to decide whether to pursue his dream of playing major league baseball or to settle down and quietly raise his new family in his home town of New Paltz, New York.

It’s a lot for a stressed-out college senior to assimilate, made more difficult when a painful title game loss spells the end of a once-bright season for New Paltz. For Enzo, it marks the beginning of a pivotal period in which he is forced to question his long-held Catholic convictions as well as his single-minded devotion to baseball.

Despite tremendous pressure to stay home, Enzo stubbornly decides to visit Cortland for a summer training camp. At the much bigger university, he feels his chances of getting noticed by a pro baseball scout will improve exponentially. What he finds there, however, is a petite New Age guru named Judy Booth, who helps him sort out his conflicted feelings about religion, responsibilities and just what his decisions going forward might mean. Booth’s decidedly unorthodox teaching methods are both painful and enlightening—and what Enzo ultimately learns has absolutely nothing to do with baseball.

This is a thoughtful, articulate and often humorous narrative about the choices we all make, sometimes in the space of a single heartbeat, and the life-altering impact of our subsequent actions. It’s also a bittersweet tale of self-discovery and seminal experiences, full of realistic dialogue, unexpected situations and offbeat characters. A highly readable novel that recalls the style of Michael Chabon or John Irving, this is a literary gem that should not be missed.