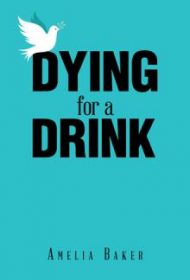 In Dying for a Drink, Amelia Baker relates a story of alcoholism that goes from social and glamorous to anything but.

Baker describes marrying a charming man on his way up the corporate ladder. A trained nurse, she’s happy to be a stay-at-home mom, enjoying wine and champagne at social events with her husband. Soon wine turns into vodka and social drinking becomes secretive, ending in blackouts. Baker endures multiple rounds of rehab, often checking out, only to go directly to a liquor store.

It’s not pretty. And this unsparing look at the cycle of addiction is sad and sometimes hard to read. For example, at one point, Baker writes: “My girlfriends became suspicious, as I was texting, not ringing. And when I did speak to one of them on a Saturday morning, I was slurring my speech and said I was just tired. I came to on the kitchen floor later that day.”

Baker’s first husband left her but was supportive of her efforts to get sober; she only hints at her second marriage, which was abusive and over in three months.

Many stories of alcoholism try to reproduce the addict’s experience, but Baker also puts readers into the shoes of her friends and family, who are supportive and hopeful but also terrified that she could die at any time. Her matter-of-fact writing style, humble rather than showy, makes readers feel like bystanders to a tragedy that they can’t prevent. Baker ends on a hopeful note, newly sober, but painfully aware of her fragile state. A section at book’s end discussing 12-step recovery slogans feels superfluous, but readers with addictions may appreciate the inclusion.

Dying for a Drink is written without literary flourish but doesn’t skimp on illuminating details. It reminds us that sometimes the most supportive thing a loved one can do is let go of hope that the situation will change. Readers will find themselves wishing Baker all the best.