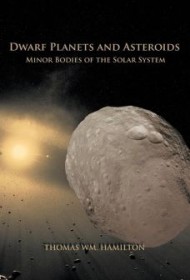 Dwarf Planets and Asteroids: Minor Bodies of the Solar System is not a book for amateur astronomers. While backyard stargazers can learn a thing or two from retired astronomer Thomas Wm. Hamilton’s detailed reference book, it’s meant more for the serious researcher. Although it’s less than 100 pages, Hamilton includes incredibly detailed data on the discovery, naming, orbits, and physical characteristics of dwarf planets and asteroids.

This is Hamilton’s fourth nonfiction title, following similar books on stars and moons, and he’s clearly an expert. His background includes work on the Apollo Project and over 30 years of teaching college-level astronomy. He offers only a short prelude—a brief background on what makes an asteroid an asteroid, and how they are named—before launching into a selected list of known asteroids, organized by number. You’ll need a science background or a good dictionary to appreciate the implications of the compiled data on asteroid features such as “aphelion,” “perihelion,” “eccentricity,” and “albedo.”

Each entry is packed with such information, along with the asteroid’s discovery date, naming history, and other known characteristics. Much of this is fairly dry, but Hamilton occasionally pops up with a humorous aside, such as in his entry for Ismene: “It is named for Antigone’s sister (you forgot she had a sister?)”

Hamilton adds dimension to his catalog with photographs from asteroids that have been visited by spacecraft, though these are low resolution reproductions that don’t enhance the text as much as they might have with better production values.

There is so much information packed in this brief reference book that few will ever read it front to back, so it’s excellent that Hamilton includes extensive indexes to the material. Overall, Dwarf Planets and Asteroids earns a place in the academic astronomy world with its straightforward presentation of the amazing amount of data that has been gathered about our solar system.