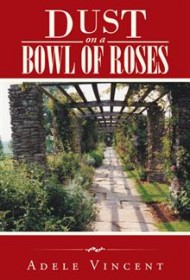 Dust on a Bowl of Roses is a delightful new entry into the English cozy mystery genre.

Julia Dobson is still reeling after the deaths of her parents, just six months previously, and that of her husband, a career diplomat, three months before. She has come to her parents’ home, Flora Cottage, in the village of Blymton to begin the process of healing. Instead, she almost immediately becomes involved with the strange family next door when her mothering instincts lead her to befriend the 17-year-old daughter.

While not as nosy—or as pushy—as Miss Marple, Julia manages to find herself in the middle of everything from sewing costumes for the amateur theatricals, to finding a body at the English Heritage site of Hestercombe Gardens, to helping the police with their inquiries, to an attempt on her life. There may even be romance to come for Julia.

Vincent has included all the characters you’d expect to find in a village cozy: the lord and lady of the manor, the nosy landlady, the gossiping news agent, the long-buried scandal. And there are unexpected elements, such as a leather-wearing gang and the Nazi-loving teenager who tortures animals. Set in the 1980s, it’s a world without Google or cell phones, where messages are delayed or go astray, and people can go “off the grid,” making police work much harder.

Warning to the reader: You may think you have worked out “whodunit” by the middle of the book, but, in the Christie tradition, Vincent has some twists and surprises in store near the end that will deflate your smugness. All told, this is a delightful read that will have mystery fans looking forward to the next installment.