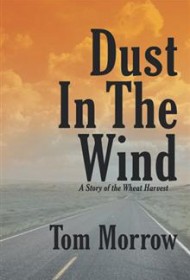 The archetypal hero of this raw-boned novel about growing up is 17-year-old Dave White, who, in 1960, flees his parents and girlfriend in dead-end Crane, Oklahoma to seek adventure–and to make enough money for a decent used car. “I guess I was one of the rovers,” Dave muses, “and it ran deeper in me than most.”

Taking cues from Steinbeck, retired Oklahoma City fireman Tom Morrow throws his restless young protagonist into the hard-bitten, sometimes violent world of migrant farm labor. Dave becomes a “wheat tramp,” following the harvest from one sun-baked field to the next in Oklahoma, Texas and Colorado. In off hours, his boozy workmate Frank Turner teaches Dave to drink straight from the pint. Another, volatile Slim Devers, who has already done five years in Huntsville for manslaughter, gouges a man’s eye out in a bar fight. Dave even finds time to fall in love. The townsfolk often mock the tough, transient “Wheaties,” but they comprise a soldierly brotherhood of danger, pride and sorrow. (It comes as no surprise that the author served two tours in Vietnam.)

Morrow’s lean, muscular prose (“I was in a man’s world now, and I was expected to act like a man”) is countermanded occasionally by Whitmanesque sentimentality (“I was the wheat; I was the harvest”), and his characters’ cartoonish primitive ’60s views of women: cafe waitresses are forever switching their hips in invitation, and a pretty barmaid is called “prime meat.” The former arson investigator is right at home, though, describing a tragic wheat field fire: “The flames would spin now and then into tornadic vortexes, raising high into the startling blue sky, howling as if they were live things in pain, crackling like a thousand rifles going off . . .”

Dave White’s coming-of-age may be familiar, but in Morrow’s hands it’s hard-won and frequently moving. Wherever he lands, however he screws up, here’s another embattled Okie worth rooting for.