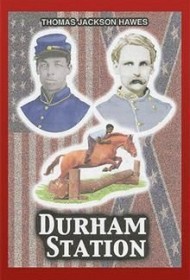 This novel of brotherhood and struggle in North Carolina before, during and after the Civil War is an engaging exploration of the people and events of those bloody years.

On a nameless battlefield strewn with the dead and dying, Buck, an African American lieutenant in the Union Army, comes across Jeff, a wounded Confederate who, surprisingly, happens to be his best friend. Unlikely or not, after their miraculous reunion the two resolve that they’ve seen enough killing and head south toward home through a broken landscape of defeated Rebels and marauding Yankees bent on destruction.

The explanation of their unusual relationship begins in flashback. Illustrating the complications of slavery, Buck, son of a freed man, is the property of Jeff’s father, who nevertheless encourages the friendship with his own son. But the harmony is upset when Buck and his young sister Mandy (who has a crush on Jeff) witness a crime committed by the viciously racist deputy sheriff, thereby earning an enemy bent on silencing them both.

Tension escalates until the war starts and Buck is set free, heading north to join the Union, while Jeff, now a married man, signs up with the Confederates, separating the friends almost until the final guns are fired.

Though unlikely that Buck became an officer (of the roughly 200,000 blacks who fought, fewer than 80 were commissioned), it is still a possibility, as history does indeed record such battlefield encounters as his reunion with Jeff. It may also be difficult to accept the relatively progressive racial attitudes portrayed here of many whites around Durham.

The author manages to transcend all doubts, however, through the richness of his characters as well as the crisp, revealing dialogue between them. What rings particularly true is the picture of a special friendship across the yawning racial divide. Despite several improbabilities, Durham Station is an arresting exploration of the people and events of those bloody years.