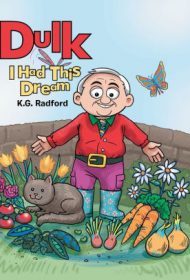 K.G. Radford’s children’s picture book, Dulk: I Had This Dream, tells the strange story of a man who dreams he can talk to his garden vegetables, only to find that he actually can when he wakes up.

The tale begins with Dulk, an older, white-haired man, having trouble falling asleep. The following morning, Dulk wakes, eats breakfast, drinks his tea, and goes outside to find that the mushrooms, flowers, carrot and onion in his garden can speak! When he asks why they’ve never spoken before, they explain that Dulk always looked sad and angry. “‘Oh dear!’ groaned Dulk, “I’d better change the looks on my face then.’“

The scene soon cuts to Dulk waking up from what was apparently a dream and smiling. He follows his morning routine and discovers that he actually can talk to the peas in his garden, and that his dream has come true.

Dulk is a strange book, partly, it seems, by design: The first two pages give the impression of a regular night/day cycle, but it’s surprising when, a few pages later, it’s revealed that Dulk was really just dreaming the whole time. The intentional confusion, however, is often matched by unintentional confusion; certain elements of the story are introduced without explanation or context, such Dulk’s “magic plant food” and his “breakfast bricks” (a bowl of blue rectangular morsels, he eats like cereal with a spoon).

Additionally, none of the points the story touches on (the fact that Dulk’s dreams can come true; the idea that people should smile and be cheerful) seem fully developed. And the book’s overall message is ultimately unclear: What is gained by the plants’ ability to talk?

Visually, the full-color book has its charms, with Dulk dressed humorously, in garish shirts and pants, a tie (even under his pajamas), and flowered rubber boots. But the oddness of the storytelling makes it unlikely to have wide appeal among young readers.