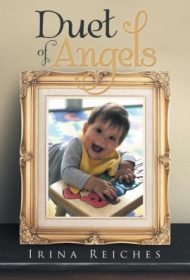 In the turmoil besetting Poland during WWII, a baby girl is thrust into the hands of a gentile stranger for safekeeping. Raised with a Communist education, the girl later is startled to learn she is Jewish and struggles to move forward in Irina Reiches’ engaging, multilayered historical novel Duet of Angels.

The story opens with a jolt: “I was twenty-seven years old when I died.” The scene, narrated by a young man named Israel, sets the stage for a story about his baby, Sonia, during a turbulent, menacing time after Poland is divided in 1939 and the Soviet Red Army invades eastern Poland and Lithuania.

By 1941, as the extermination of Jews relentlessly increases, Israel’s young wife, Raisa, fears for Sonia’s life and arranges for a non-Jewish woman to keep her safe while Raisa and her family flee across the border. The balance of the book follows Sonia as she grows up embracing the empty promises of post-WWII Communism, unaware of her Jewish past.  When she later learns her origins and that her mother is alive, she grapples with finding her true identity.

In this carefully constructed narrative, the author offers keenly observed details of war’s ravages. The characters are emotionally rich, their words and actions showing their pain, fears, and vulnerabilities.

One quibble in this otherwise rich book is that it fails to reveal details of Israel’s life in the years just before his death. But the book’s shifting narrative perspectives add depth, and Reiches effectively adds subtle elements of mood through her descriptive writing. For example, in reference to Raisa’s hometown, where so many Jews were murdered, she pens, “Far away in Vilnius, the golden fall was fading, zealously grasping the last warm rays of the autumn sun, yet scarcely heating its bare, and by now, withered bones.”

This insightful, highly readable and moving story is ripe for a wide readership.