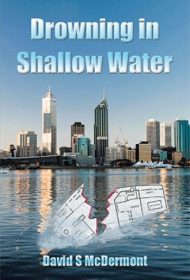 Drowning in Shallow Water is a business story wrapped within a crime novel.

The novel opens with protagonist Gavin Carter, an Australian procurement consultant, sniffing out corruption during a business deal in India and escaping with his life. His investigation unfortunately leads to the tragic death of the woman he loves.

The narrative then makes a 180-degree turn when Carter decides to pursue his lifelong dream of designing a yacht that’s small and easy to transport, but with enough space to offer retiring baby-boomers the comfort they seek. Carter finds a partner who can help finance the manufacturing. Soon enough, he has a company in Singapore willing to buy the first 10 boats when they’re ready.

The plot turns to crime when it takes a deeper look at Carter’s financing partner Harry Grant, a professor of environmental science who ran a reef research project, and how he got the money to invest in Carter’s venture. Other main players in the story include Grant’s romantic partner, who is the wife of Grant’s former reef research partner, who has disappeared, and the woman who works for the company that’s purchasing Carter’s yachts, with whom Carter falls in love.

They’re all flawed characters in various ways. None are very likable, so readers may not have much empathy for them or investment in the story’s outcome.

The book’s momentum flags with too many boating details, as in: “The rigging comprised a roller reefing jib and a fully battened, roached main that could be easily reefed.” There’s a list of characters at the beginning of the book, but a glossary of nautical terms would have been more helpful.

Additionally, it could have used a diligent proofreader to correct missing punctuation and incorrect words (some occasionally humorous, such as in, “wonton sexual tensions”).

While general readers will likely be deterred by detailed boating descriptions, the book might appeal to sailors or those interested in Perth, Australia, where the story is set.